1 One day as he was teaching the people in the temple area and proclaiming the good news, the chief priests and scribes, together with the elders, approached him

and said to him, “Tell us, by what authority are you doing these things? Or who is the one who gave you this authority?” 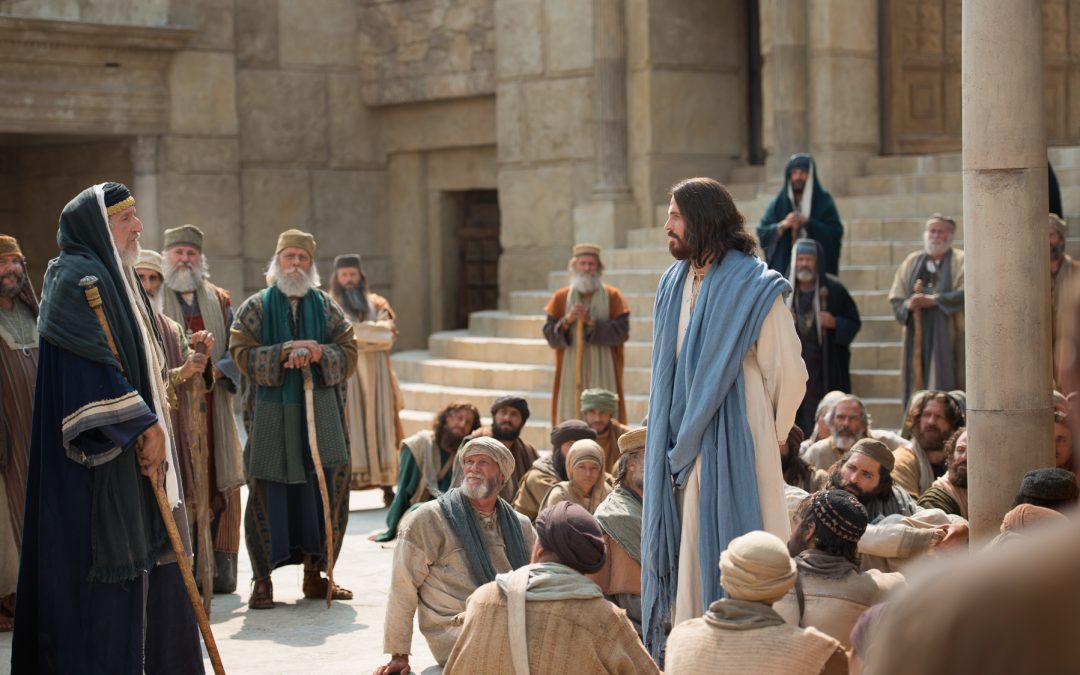 He said to them in reply, “I shall ask you a question. Tell me,

was John’s baptism of heavenly or of human origin?”

They discussed this among themselves, and said, “If we say, ‘Of heavenly origin,’ he will say, ‘Why did you not believe him?’

But if we say, ‘Of human origin,’ then all the people will stone us, for they are convinced that John was a prophet.”

So they answered that they did not know from where it came.

Then Jesus said to them, “Neither shall I tell you by what authority I do these things.”

2 Then he proceeded to tell the people this parable. “(A) man planted a vineyard, leased it to tenant farmers, and then went on a journey for a long time.

At harvest time he sent a servant to the tenant farmers to receive some of the produce of the vineyard. But they beat the servant and sent him away empty-handed.

So he proceeded to send another servant, but him also they beat and insulted and sent away empty-handed.

Then he proceeded to send a third, but this one too they wounded and threw out.

The owner of the vineyard said, ‘What shall I do? I shall send my beloved son; maybe they will respect him.’

But when the tenant farmers saw him they said to one another, ‘This is the heir. Let us kill him that the inheritance may become ours.’

He will come and put those tenant farmers to death and turn over the vineyard to others.” When the people heard this, they exclaimed, “Let it not be so!”

But he looked at them and asked, “What then does this scripture passage mean: ‘The stone which the builders rejected has become the cornerstone’?

Everyone who falls on that stone will be dashed to pieces; and it will crush anyone on whom it falls.”

The scribes and chief priests sought to lay their hands on him at that very hour, but they feared the people, for they knew that he had addressed this parable to them.

4 They watched him closely and sent agents pretending to be righteous who were to trap him in speech, in order to hand him over to the authority and power of the governor.

They posed this question to him, “Teacher, we know that what you say and teach is correct, and you show no partiality, but teach the way of God in accordance with the truth.

Is it lawful for us to pay tribute to Caesar or not?” 5

Recognizing their craftiness he said to them,

“Show me a denarius; 6 whose image and name does it bear?” They replied, “Caesar’s.”

They were unable to trap him by something he might say before the people, and so amazed were they at his reply that they fell silent.

Some Sadducees, 7 those who deny that there is a resurrection, came forward and put this question to him,

8 saying, “Teacher, Moses wrote for us, ‘If someone’s brother dies leaving a wife but no child, his brother must take the wife and raise up descendants for his brother.’

Now there were seven brothers; the first married a woman but died childless.

and the third married her, and likewise all the seven died childless.

Now at the resurrection whose wife will that woman be? For all seven had been married to her.”

Jesus said to them, “The children of this age marry and remarry;

but those who are deemed worthy to attain to the coming age and to the resurrection of the dead neither marry nor are given in marriage.

They can no longer die, for they are like angels; and they are the children of God because they are the ones who will rise. 9

That the dead will rise even Moses made known in the passage about the bush, when he called ‘Lord’ the God of Abraham, the God of Isaac, and the God of Jacob;

and he is not God of the dead, but of the living, for to him all are alive.”

Some of the scribes said in reply, “Teacher, you have answered well.”

And they no longer dared to ask him anything.

10 Then he said to them, “How do they claim that the Messiah is the Son of David?

For David himself in the Book of Psalms says: ‘The Lord said to my lord, “Sit at my right hand

till I make your enemies your footstool.”‘

Now if David calls him ‘lord,’ how can he be his son?”

Then, within the hearing of all the people, he said to (his) disciples,

“Be on guard against the scribes, who like to go around in long robes and love greetings in marketplaces, seats of honor in synagogues, and places of honor at banquets.

They devour the houses of widows and, as a pretext, recite lengthy prayers. They will receive a very severe condemnation.”

1 [1-47] The Jerusalem religious leaders or their representatives, in an attempt to incriminate Jesus with the Romans and to discredit him with the people, pose a number of questions to him (about his authority, 2; about payment of taxes, ⇒Luke 20:22; about the resurrection, ⇒ Luke 20:28-33).

2 [9-19] This parable about an absentee landlord and a tenant farmers’ revolt reflects the social and economic conditions of rural Palestine in the first century. The synoptic gospel writers use the parable to describe how the rejection of the landlord’s son becomes the occasion for the vineyard to be taken away from those to whom it was entrusted (the religious leadership of Judaism that rejects the teaching and preaching of Jesus; ⇒ Luke 20:19).

3 [15] They threw him out of the vineyard and killed him: cf ⇒ Mark 12:8. Luke has altered his Marcan source and reports that the murder of the son takes place outside the vineyard to reflect the tradition of Jesus’ death outside the walls of the city of Jerusalem (see ⇒ Hebrews 13:12).

4 [20] The governor: i.e., Pontius Pilate, the Roman administrator responsible for the collection of taxes and maintenance of order in Palestine.

5 [22] Through their question the agents of the Jerusalem religious leadership hope to force Jesus to take sides on one of the sensitive political issues of first-century Palestine. The issue of nonpayment of taxes to Rome becomes one of the focal points of the First Jewish Revolt (A.D. 66-70) that resulted in the Roman destruction of Jerusalem and the temple. See also the note on ⇒ Matthew 22:15-22.

9 [36] Because they are the ones who will rise: literally, “being sons of the resurrection.”

10 [41-44] After successfully answering the three questions of his opponents, Jesus now asks them a question. Their inability to respond implies that they have forfeited their position and authority as the religious leaders of the people because they do not understand the scriptures. This series of controversies between the religious leadership of Jerusalem and Jesus reveals Jesus as the authoritative teacher whose words are to be listened to (see ⇒ Luke 9:35). See also the notes on ⇒Matthew 22:41-46.